Sander Vergroesen (IRO) and René Peters (Energy Reinvented Community) have donated Sjoerd Veldkamp of Stichting Duik de Noordzee Schoon a cheque of 3,000 euros. With this cheque both organisations make the English translation of the adventure book IN DE DIEPTE of the Foundation possible.

During the programme of the Energy Reinvented Community event on 8 October at the NBC in Nieuwegein, speakers and participants reflected on the important work of the Foundation.

"The volunteers of Stichting Duik de Noordzee Schoon are a great source of inspiration for the boards of Energy Reinvented Community and IRO", said Sander Vergroesen, director of IRO, the interest group of suppliers in the Offshore Energy Industry.

Energy Reinvented Community and IRO jointly financed the translation into English of the adventure book IN DE DIEPTE. In the book, beautiful images and impressive stories reveal fourteen diving expeditions of the Foundation. Fully funded by their own contributions and donations, expedition members dedicate themselves to protecting the unique reefs with their flora and fauna at the bottom of the North Sea. Every year they organise one or more expeditions to special areas of the North Sea to increase knowledge of the North Sea, and to protect the reefs created by shipwrecks from destruction and waste.

"To support the Foundation in reaching out to an international audience, we have joined forces to finance the translation into English of the Foundation's adventure book IN DE DIEPTE", explained René Peters. With the sale of the English-language book (€ 25.00), the Foundation can finance one or more diving days during their next expeditions. 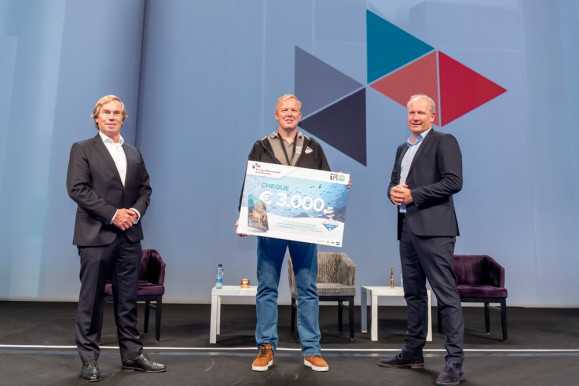 Apart from the beautiful images, the book also shows the important work of the volunteers. Recently, thirteen wrecks north of Ameland and Schiermonnikoog were cleared of lost cargo and nets by an experienced diving team of 30 volunteers. Most of these came from cargo ship MSC Zoe, which lost 342 sea containers in the North Sea above the Wadden Islands during the night of 1 to 2 January 2019.

On behalf of the Stichting Duik de Noordzee Schoon Sjoerd Veldkamp said: "A very nice gesture to get our story across the border by means of a book. We had this wish for a long time.

The English-language book is expected to be available at the end of November. Would you like to order the book directly? Use the QR code!